So we bought the 1st Smart in the Mercedescenter Duisburg because Schlaubi was shown to us in another center. At first I was not so enthusiastic about the color, blue and white are the colors of FC Schalke (Soccer club in Germany), we are Fortuna Düsseldorf fans, the colors: red and white. But when I saw him standing there like this: white rims, also for winter, with the equipment. Then it happened to me. Schlaubi called me to take me and I took him. We were in a smart club, unfortunately the club broke up. But we went with them to Hambach, Smart’s main center, because special smarts were exhibited there. We didn’t know, because Schlaubi was the only vehicle that wore these color combinations. 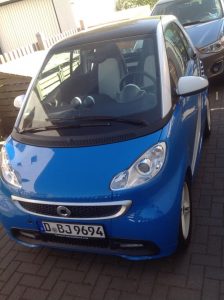 Everyone was blown away like me, but it was too late to get a price, the registration deadline was over. We also lived in Hessen for about 13 years, Odenwald, have seen on the Internet that the smart club in Frankfurt / Main is organizing a spring fling and Indian summer tour. During the last Indian summer tour in Aschaffenburg we got to know the Smartlovers, in the morning at the breakfast table. We took part and drove through our older homeland. Then Jörg and I organized a tour through the Bergisches Land with our smart friends, Wuppertal, Solingen across the country until we stopped in a pancake mill, was a wonderful tour. Then we did a scavenger hunt in the rain with the Smartclub Nierrhein, which was very funny. In between we went to eat with the Smartclub Ruhrgebiet, which was also interesting. This club only meets, but does not do tours, also interesting. The next major tour is the Smartweihe in October in Amberg. I am curious.

Now for tequila. In November we got an 8 year old Maltese dog from friends. Was freed from a bad six-month stance, so to speak. Mistress and owner died shortly after one another. Tequila was 95 percent dead. Our vet got her back to the point where she only had to take a few medicines over the long term and took all the tours with us. She thinks that’s really great. Likes to drive a car for her life, if she were not a dog, she would also have a Smart.