One day I found that Smart Roadster on the Internet. Problem: the car was located in Brandenburg.

For a German, driving to Brandenburg feels the same like for a guy from New Jersey driving to Texas.

It was worth every kilometer.

The seller just bought a bunch of cars that belonged to an old guy who died recently. And he did not know that he had one diamond in this bunch of rocks.

Of course I bought it immediately. 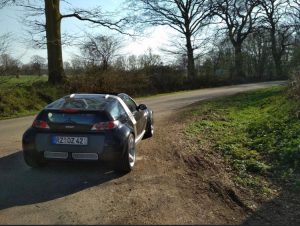 Since then, we had good and bad times. The good times: e.g. driving to the last Smart Times in Spain with my best friend. The not-so-good times: two accidents. Once I hit a reindeer. I still feel sorry for that little guy. And last Autumn the Smart did a 360 degrees turn while riding on the Autobahn at about 100 kph near Lübeck on a rainy day.

But it’s alive. The only reason that it’s not on the road these days is the crisis. I cannot get a new license plate that allows us to drive all year long and not only from March to October.

But this car and me went through troublesome times before, and now we just have to wait. 🤗🥰

If you asked me about the name, I’d call it unsinkable Molly Brown. But years ago I already gave this name to the Triumph Thunderbird Sport that I drove years ago.